Our favourite news this week was the sale of Afterpay to US giant Square.

Square bought Afterpay for $39 billion, the biggest merger and acquisition in Australia’s history and remarkable given the company was only started in 2014.

Regardless of how you feel about ‘buy now, pay later’ services, this is great Aussie success story!

The other big news this week was the announcement by National Cabinet of a 3-phase COVID recovery plan (phases B, C & D). We’re in phase A today.

Phase B requires us to hit 70 per cent full immunisation (first and second dose). This phase will mean less chance of lockdown and the resumption of international arrivals (including students).

Phase C kicks in at 80 per cent full immunisation. This phase will mean only highly targeted lockdowns, no cap on returns for vaccinated Aussies and more international travel and bubbles.

Phase  D will effectively be life back to normal. There is no specific target attached to this phase as yet.

Not sure how we will go on that front, but it’s good to see some light at the end of the tunnel.

Despite half of Australia being locked down during July, it hasn’t done much to stop the momentum of the housing market.

Capital city house prices were up 1.8 per cent in July, with the median house price up 18 per cent for the year. 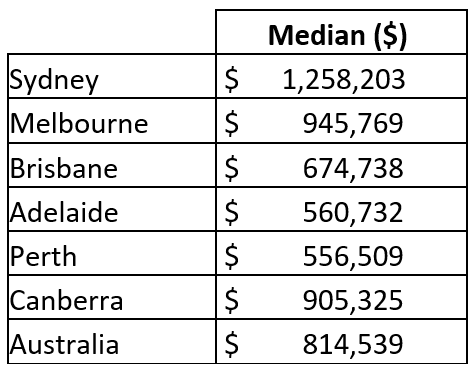 Perhaps most surprising was that rents continued a steep rate of growth. Rents on houses in Perth are up 16.6 per cent for the year, Brisbane up 9.4 per cent and Adelaide up 8.2 per cent.

Which brings us to our final point for this week – affordability.

There’s been a lot of commentary in the media over the past month, and rightly so, that the median house price is nearly ten times the value of the average wage in Australia today.

A couple of weeks ago we touched on how loan repayments as a ratio of household incomes are actually the lowest they’ve been since 2005.

The biggest lever we have when it comes to affordability is density. Australian cities are nowhere near as densely populated as our overseas counterparts on a people per square kilometre basis:

The average Australian lives in 89sq m of living space. By comparison, the average Canadian lives in 72sq m of space. In the UK and Japan that number is 33sq m and 35sq m respectively.

The irony is that in 1996, the average home size in Australia was 120sq m and consisted of 3.5 people per household. That works out to be 34sq m of living space per person. That house sat on 1,000sq m of land (12 per cent site coverage).

Today, the average size of a home in Australia is 196sq m and the average household consists of 2.6 people. That works out to be 75sq m of living space per person. That house sits on 400sq m of land (49per cent site coverage).

The average block of land started out at 100sq m in the 1920’s – with more than 100 per cent site cover – that evolved in the post-war era into the quarter acre, 1000sq m block, and has gradually reduced in size since (under 400sq m in most cities).

It’s for this reason land in fast growing areas in capital cities is the safest and best-performing asset you can invest in. There’s no more land being made. As the population grows, so too will the valuation of your land, particularly as we move toward higher density as the solution to affordability.