A few weeks ago, we all did the Census. It’s the one time every five years that we get to find out where we live, how old we are, what we do, believe in and where we come from.

One of the main things that we look at with interest is home ownership.

We won’t know for sure where that number sits when the Census results come out mid next year. However, recent surveys from the ABS suggest the proportion of Australians renting fell from 32 per cent in late 2019 to 27 per cent in late 2020.  As would make sense, the ABS instead saw an increase in the number of Aussies who own a home with a mortgage, rising from 33 per cent to 38 per cent over the same period.

An increase of 5 per cent works out to be roughly 500,000 households that went from being rented to owned with a mortgage in the space of 12 months!

Homeowners have been capitalising on rising property values by taking out equity loans. Mortgage top ups and increases which were used on renovations, cars, and property investments, rose by nearly $93 billion in the past year.

During the month of June alone, mortgage top-ups increased by $10 billion, which is up by nearly 20 per cent on the same time last year. 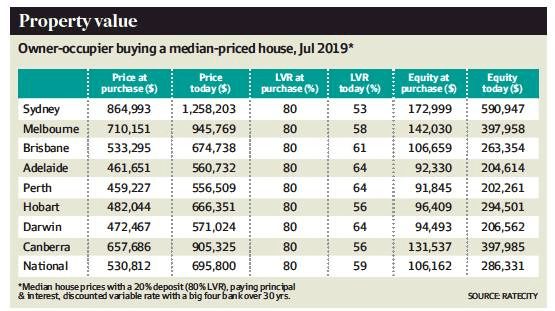 In other news, asking rents were up throughout Australia by 14.6 per cent for houses compared with this time last year.

Asking rents for houses in capital cities increased in Sydney (10.2 per cent), Brisbane (11.2 per cent), Adelaide (9.2 per cent) and Perth (12.9 per cent). Even in Melbourne – the hardest hit by lockdowns – asking rents were effectively stable (-.04 per cent).

To put it in perspective, the average asking rent on a house across Australia increased by $65 per week. That’s why it’s really important, if you’re a landlord, that you do your research and push your rents where possible.

Many Custodians have invested in Adelaide in the past couple of years and their faith is being repaid with record land sales in the city. The volume of land sold in the June quarter exceeded 500 lots per month, which is the fifth consecutive quarter of record high sale volumes.

That’s been largely off the back of affordability and big investments in defence, health, education and renewables. There could even be a cherry on top with the University of Adelaide poised to be the first place in Australia to manufacture messenger RNA vaccines.

Confused by what a messenger RNA is?

Turns out an mRNA is a type of vaccine that uses a copy of a molecule called messenger RNA to produce an immune response. This is apparently the technology used in most of the COVID-19 vaccines.

Turns out the University of Adelaide have the only ‘bacterial reactor’ in Australia that is approved globally to make the starting ingredients for the mRNA, plus a workforce of 80 who are trained in how to use it.

With at least 16 million Aussies likely to be needing a vaccination for the foreseeable future – and potentially multiple each year – could be a massive job boom for Adelaide if it comes off.