About Compound - Do your numbers!

About Compound - Do your numbers!

7 Steps is also based on compound interest (and compound growth), however I recently learned some of you may not be fully aware of this point.

At our recent Custodian Partners boot camp we were doing a modelling section on 'passing rents' to show the effect of our compound rents (same principle as Buffet’s compound interest).

The room of 40 Partners held more than 200 properties with 3 of them owning 10, and more than 20 owning 4 or more. I have to admit it surprised me that many didn't know about their passing rents.

Certainly worth you all sitting down and running the numbers, especially in today's low interest landscape. As you know banks are paying 3% interest on deposits.

Let’s put this into practice with my own portfolio:

I expect the property to grow by 8% per annum average, meaning the growth alone is currently over 200% per annum on my equity. Worth doing your numbers…

2. My Runcorn property is even better from a cash return perspective

If you hold property through a cycle, the compound returns on both rents and growth are amazing. To me there is nothing better and it's straight from the Buffett’s play book. I think the main reason most investors don't realise it, is that they take a short term perspective.
At boot camp we had a few clients with compound rents now up to as much as 14%. This shows the real benefit of taking a position and holding it when we have banks paying 3% on deposits.

I've noticed too, that when the properties are slow in growth phase, the rents grow faster and vice versa. 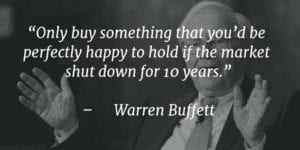 If you add your income to the equation it kicks those compound numbers even higher. The distortion is obviously the house, but it’s the house that gives us the leverage.

Right across the world the last 10 years have seen a very low interest and low growth environment. If the best investor in the world can only get 6.8% total growth (compound) and you’re getting rental returns alone of 5% - 6% which have given you leverage, plus land growth of at least 10% per annum compound, I think we are doing pretty well.

There’s one point we need to be cognisant on. Property is cyclical. For us to get the full benefit of these compounding returns we need to go through a cycle. Our Sydney land has grown by 120% -150% since 2011 with houses more than doubling in value which is well above the median house price growth there.

Melbourne is well into its uplift but like Sydney, suburbs sprouting at different times – so not the full blanket uplift that we had that took right until mid-2014 to occur in Sydney and Brisbane , Gold Coast is seeing its tremendous green shoots with now many consecutive quarters of growth building momentum up to double digit growth.

Do your numbers. It’s time well spent, I guarantee it.