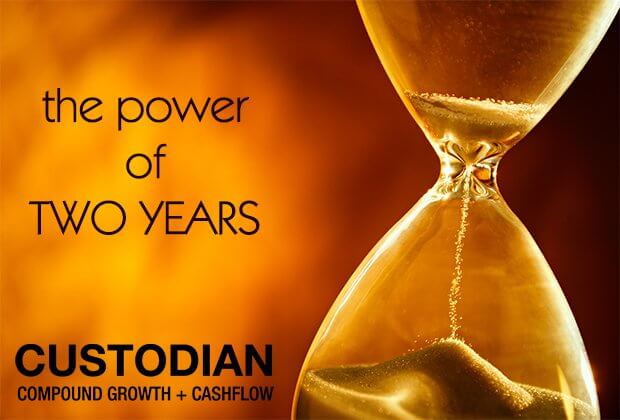 As we step into a new year, I need to bring up the story of a recently retired client of ours and the importance of holding onto property until the time is right.

Her story is significant for all Custodians.

This client started building wealth later in life, between her 50’s and 60’s, and when the time came for her to retire, she was looking for something to sell.

Melbourne city inner suburbs had been through their cycle but she hadn’t seen much growth at all in Deer Park. In fact, the median house price had only risen by $40,000 from 2007 to 2015.

She called me, telling me that she needed to sell it, that it wasn’t making her money and that she wished she’d never bought it!

What is critical to understand is that during a cycle, after the inner suburbs of a city increase in value, the growth then surges out to the middle and outer areas over time.

I told her she could not sell that property. “Hold it. Trust in the cycle and hold.”

Over the next two years she watched as house prices boomed in the western suburbs. When she finally went to sell – when the time was right - her agent received an offer of $550,000 that she declined; it then went to auction and sold for $610,000.

It’s often said that 90% of us give up in the last 10%. We stop just before the finish line. For those of you thinking about giving up I would say keep pushing and remember the impact an additional two years can make to your profit the next time you think of selling. Most of all, talk to us. We study those numbers, day in – day out.

I know you advise to buy property around metro areas which I agree with. I'm currently in the market to buy a home for my young family in a regional town ( Echuca/Moama). What would you advise to buy for capital growth in a regional city? An older property that is central but has less land content or a house on a larger block (1500sqm) in a new estate on the edge of town (5-6kms out)?

Be great to hear your thoughts.

Thanks for the note. Buying your own home to live in is an emotional decision that depends on your family’s circumstances and reasons for buying.
7 Steps is about investing for capital growth. I do not suggest to buy in regional areas because when the market has a hiccup, these areas are hit the hardest. In a capital city you have major industries feeding off each other and a major population base. If a regional area was to lose one of their major employment hubs, the area would suffer economically, unemployment would go up and with this, rental vacancy rates follow.
It is in my experience and as I state in 7 steps, land increases in value by nearly twice as much as house values. Land in any 10 year period shows around 15-20% growth depending on the location. If you are wanting to buy for capital growth the key is demand and location. Residential property is underpinned by population, employment and lifestyle. So ideally areas no more than 50 kilometres from a capital city. If you can find an area that suits your family with these factors – I can assure you growth is inevitable.
I don’t study those markets but I hope this above rationale/method helps you to assess your decision. Any questions do not hesitate. - From John

Very good reading, thanks for sharing this story