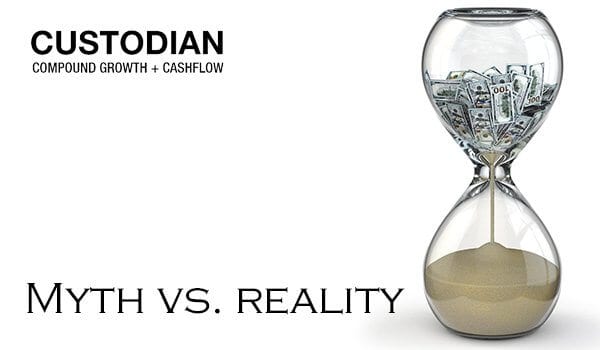 Firstly welcome to Spring. The next 3 months’ price growth will be most interesting, as usual.

Thousands of Custodians tuned in to attend our mid-year Webinar (a record attendance actually!), where I rang the bell on finance and the Sydney cycle.

To me, we are midway through the biggest boom in Australian history. It's pretty simple – because we have the highest population growth and the lowest interest rates ever - and the proof is in the pudding. Sydney median house prices have grown by almost 14% each over the past year.

The experts (definition: someone who tells you what you can't do and why) worry about a price crash and "what if" interest rates rise.

There's no history of median house prices crashing in Australia and the Census shows that in 2016 borrowers saw their mortgage repayments drop from $1,800 a month in 2011 to $1,755! In the same period, incomes rose from $1,234 to $1,438 a week. So the constant cry from the press about affordability isn’t supported by the Census.

Having said that, Sydney is near its peak. History tells us that Sydney will go up another 10% in this cycle and then come off 5% (that doesn’t sound like a crash). As I've said before, the wild card in this boom is Chinese buyers, as they were not a factor in any previous cycles.

Our Sydney clients have made more than $150 million in the last few years and all cash flow positive, with nearly 81% of them using their equity to duplicate and take advantage of low interest rates and price growth in other markets.

Finance concerns me for two reasons.

1. As of January 1st, 2018, APRA will be making it harder for 2nd tier lenders to write loans. Behind the scenes, APRA has already tightened policy with major banks and limited growth in investment lending.

John Farley, who has been with us at Investloan for nearly 10 years and in banking for over 30 years, told me that he put clients’ financials through a main bank and their BC (borrowing capacity) was $280,000, whereas the same numbers put through a 2nd tier lender produced a BC of $680,000.

My concern is therefore that, as of January 1st, 2018 the 2nd tier lenders will have the same restrictions to their mortgage calculators as the main banks do today. Contact Investloan to check your finance here

I’ll finish by saying that news stories focus on increasing mortgage stress. I don't agree. The numbers tell me a different story. Of all the homes in Australia, 31% are owned outright, 30.9% are owned by investors who get negative gearing, and the balance 38.1% are the mortgage belt who have an average 73.5% LVR (Loan Value Ratio). Of the portion of people with a mortgage, over 92% of them are still able to play it safe and keep their repayments within the 30% buffer of income (as we spoke about in July).

But numbers are constantly changing.

What affects you? Finance affects you and equity growth. You need to monitor both as they are changing monthly.